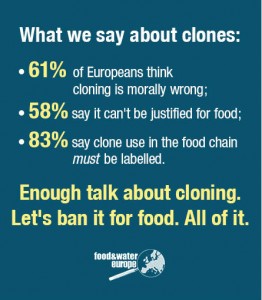 Cloning is one of those political battles that shows how hard our political leadership can try to keep ethics at arm’s length by wearing us down until we give up. It’s been going on for years. Unlike some fights, this one is very easy to understand.

The European Parliament stands firm in supporting the public’s ethical rejection of cloning as a cruel and unnecessary process that has no place in our food system. Even official EU figures show that Europeans roundly reject clones for food. The Parliament demands a full ban on the products of cloning in the food chain.

The great cloning tug of war is still on, and we need to give the rope another good pull. Act now.

The European Commission (responsible for drafting any ban), however, and Council (Member State representatives, often Ministers) stall and balk, claiming everything from the impossibility of tracing clones (isn’t all of our meat supposed to be traced “from farm to fork” nowadays?) to the risk of a “full blown trade war” if the EU bans cloning for food. Talks broke down in 2011 after the rejection of the Parliament’s compromise offer to accept cloning if the foods were properly labelled. Honestly.

So the Commission wrote some pretty poor drafts for a ban on cloning inside the EU but accepting food from clone offspring. The EU Environment and Agriculture committees in the EU Parliament have produced a report that suggests the Commission try again and come back with a full ban (including on imports). Bravo for them. The committees will vote on 17 June to approve this report (or not) and send it to the full Parliament for endorsement and a clear message to the Commission that a ban means a ban.

I’ve said it before: you can’t have clone offspring without clones, and if cloning is sufficiently cruel to warrant a ban, then the offspring cannot be acceptable food either. Letting it happen overseas and importing the results is rather like putting one’s hands over one’s ears and humming loudly to avoid the truth – you know something bad is happening or you wouldn’t need to hum. The EU does this all too often (as our addiction to imported GM industrial soya shows).

I don’t believe any of the excuses I’ve heard for failing to ban cloning. I simply don’t believe that citizens in other countries (the U.S. is frequently noted) are clamouring so loudly for cloned food that they’d be willing to support (and withstand the damage of) a trade war over it. Nonsense. If the Commission doesn’t think food from clones can be traced (or therefore, so it claims, labelled), what else aren’t they telling us about where our food comes from and what’s in it?

We are not obliged to accept everything that labs are capable of producing, and we certainly don’t have to eat it. We can refuse to be worn down by time and nonsense arguments and insist on decency. We need to support the MEPs standing up for better food and farming. Please send them a message now urging them to adopt the report and hold the line. They must be tired of this, too.